Chat with us, powered by LiveChat

Did you know that heat exchangers have been around for hundreds of years and been used in a myriad of unusual applications?  Some of the earliest applications were for stills to condense alcohol for spirits like whiskey or steam boilers to power the industrial revolution.  These exchangers were built with basic principles that involved large thermal gradients  to achieve the results they required.  They weren’t sophisticated, but they worked.

Today, I talk to customers in some of the most advanced refineries in the world and they continue to talk about a type of heat exchanger that appears to be from that bygone era:  the box cooler.

What is a Box Cooler?

A box cooler is one of the most basic type of heat exchangers that can be engineered.  It consists of a series of pipes that sit in a pool of water. Below is a schematic of how a box cooler works. 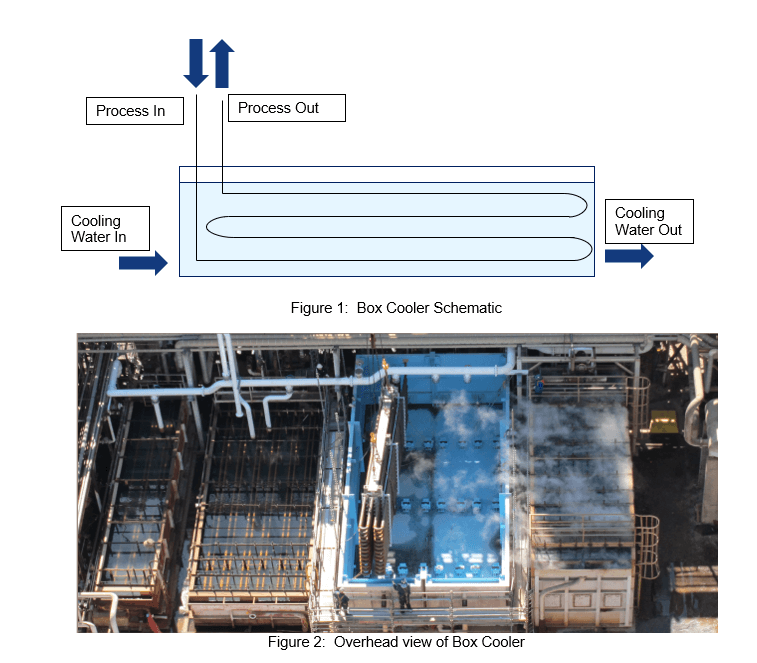 A box cooler is a heavy wall serpentine pipe bundle submersed in a bath (box) of water. Process fluid is circulated through the inside of the serpentine pipe bundle.  The cooling water is typically a once-through stream that comes from a surface water source, such as a lake or river.  The heat is rejected from the process to the cooling water as sensible heat, although if the external temperature on the pipe gets hot enough to boil water steam will be generated.

Historically these type of heat exchangers have been selected for cooling applications where the process was difficult for traditional tubular heat exchangers due to its highly viscous nature or entrained solids.  The second reason these were selected was to handle sudden duty changes in emergency situations, such as a process unit going down and the process needs to be cooled so it can go to storage.

Why do refineries use them?

Heavy oil streams in a refinery can present the following challenges when they need to be cooled.

The way many refineries have tried to handle these challenges is with brute thermal force in a box cooler.  I have heard comments that refineries don’t like them, but because performance expectations are low the feeling is they are acceptable.    Some of the design aspects of this solution are:

Why do refineries want to get rid of them?

While box coolers have a fit in this application, it is not without a significant downside.  If most refineries are given the choice, they would remove them and replace them with other solutions.  Some of the comments I have heard while visiting customers include:

As refinery customers become more focused on sustainability goals, one of the biggest drivers to remove them is the immense amount of energy that is wasted to the environment.  The majority of this energy should be able to be recycled back into the plant to reduce the amount of carbon dioxide that is produced.

Is there something better?

To handle the challenges of this process, there are different heat exchanger technologies that can meet the process requirements without the negative issues.  It is important to work with a heat exchanger technologist that understands the thermal challenges and has experience applying it.  Below are two examples of projects in which we collaborated with our refinery customers to offer a better solution than the box coolers they originally intended to use.

The first example is a solution we offered one of our Midwest refinery customers for a hot heavy oil stream that flowed intermittently.  For refineries that have cokers, there can be situations where the feed needs to be diverted due to issues in decoking a drum.  The customer needed a solution that could immediately remove a large quantity of heat as that situation arose.  Traditionally this would have been an application in which a refinery would use a box cooler.  However the customer was looking for a solution that did not include the risks of that design.  We worked with them to develop  a more affordable, alternative solution using the Compabloc heat exchanger to generate two different pressures of steam to cool the stream to the point it could be sent to storage.  This technology offered the benefits of reducing the temperature needed to send the process stream to storage as well as reducing the CAPEX due to the reduced size of the Compabloc.  There was also collaboration with the refinery to ensure the system operated properly so the exchanger was always ready to respond.

A second project example is where we moved a gulf coast refinery customer away from a box cooler.  This customer had a continuous cooling duty for a heavy oil loop that became viscous as it reached its final required temperature. The customer already had experience with box coolers, but they wanted something different in moving away from this type of exchanger.  Alfa Laval worked with them to design a solution using a Spiral Heat Exchanger that could handle solids in the stream as well as the viscous fluid.  During the initial stages of the project cooling water was being considered as the cooling medium, but as our refinery specialists evaluated the design it was discovered there would be issues with cooling the process below its pour point.  This would lead to a high pressure drop and poor thermal performance.  A complete solution with the viscous cooler and a tempered process cooler was developed and selected by the project team.

Contact your Alfa Laval technical refinery specialists to discuss how we can help you throw out your box coolers. 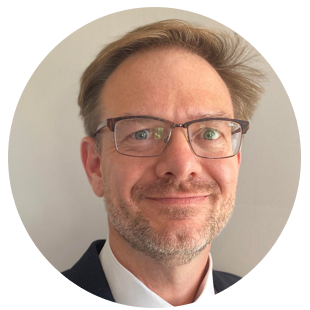 Mike Buettner is a Refinery Welded Plate Technologist and works with US refineries to implement heat exchanger technology. Mike has worked in the refinery industry for over 25 years, both in the United States and Asia, in various roles within EPC’s, refineries, and technology solution providers. Mike has a degree in Chemical Engineering from Michigan Technological University and a Master’s in Business Administration from the University of Minnesota.

For optimal efficiency, sustainability and profitability