Low Speed Ventilation is a unique server cooling technology
that uses lower air speed resulting in a non-pressurized server
room and lower energy consumption. The servers are fully saturated
with temperature controlled air at all times. Current LSV
installations are seeing PUE values as low as 1.07. 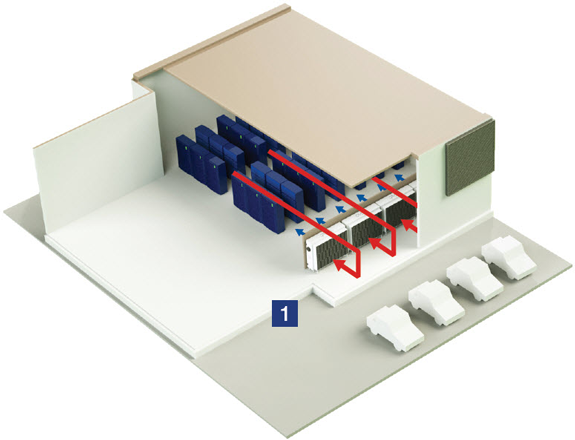 Cilck the link below for more product information.

LSV is a normal pressure technology, so operators only need
to control the air availability and not the air pressure - a big
difference from current technologies.

How does LSV compare to traditional CRAC systems? 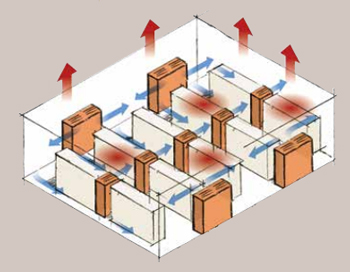 CRAC (Computer Room Air Conditioning) is currently the most common server room cooling technology. The units are placed inside the senstitive server room at strategic intervals for optimum effect. Due to the fast-streaming air, you get pressure variations in the server room. Consequently, you’ll have hot spots, or areas with little or no cooling.

Data centers make money from servers, not coolers, so the demand is for small units that take up as little space as possible. But with a small unit, there is only one way to move all the air needed to cool the servers – you accelerate it. To cool a middle-sized data center of 1MW – equivalent of what it takes to power approximately 1,000 homes – an airflow of 70 m3/s is needed, given a temperature difference (delta T) of 12 degrees. 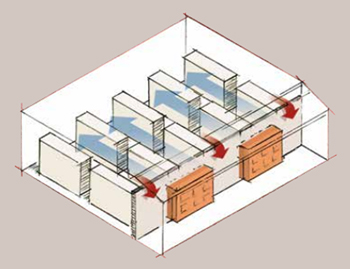 The Low Speed Ventilation (LSV) principle uses coolers installed outside the sensitive server room that draw return air from the upper plenum and quietly distribute enough cool air across the server room. The system makes sure sufficient air is being supplied.

LSV works with hot and cold containments, with or without raised floors, in closed loop systems or with the use of outside air (as shown in the installation examples below). As LSV is a normal pressure technology, data center operators only need to control the air availability and not the air pressure.

And because LSV air coolers are located outside of the sensitive server area, they're easier to access for maintenance while allowing the server room to remain secure.

As mentioned above, Low Speed Ventilation works with hot and cold
containments, with or without raised floors, in closed loop systems or
with the use of outside air. The examples below illustrate some of
the possible data center layouts.

LSV with 100% recirculation
No raised floor
Chimney on hot aisle